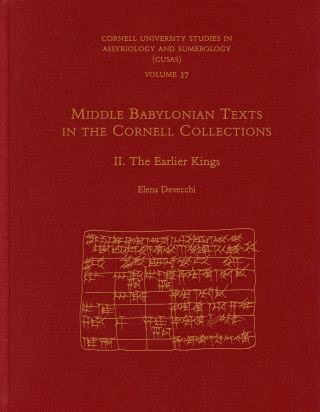 This volume completes the publication of Middle Babylonian texts from the Rosen Collection that date to the Kassite period, a project that was initiated by Wilfred H. van Soldt with CUSAS 30 in 2015. In this book, Elena Devecchi provides full transliterations, translations, and extended commentaries of 338 previously unpublished cuneiform tablets from Kassite Babylonia (ca. 1475–1155 BCE). Most of the texts are dated to the reigns of Nazi-Maruttaš and Kadašman-Turgu, but the collection also includes one tablet dating to the reign of Burna-Buriaš II and a few documents from the reigns of Kadašman-Enlil II, Kudur-Enlil, and Šagarakti-Šuriaš, as well as some that are not dated.

The tablets published here are largely administrative records dealing with the income, storage, and redistribution of agricultural products and byproducts, animal husbandry, and textile production, while legal documents and letters comprise a smaller portion of the collection. Evidence suggests that these documents originated from an administrative center that interacted closely with the provincial capital Nippur and must have been located in its vicinity. They thus expand significantly our previous knowledge of the Nippur region under Kassite rule, hitherto almost exclusively based on sources that came from Nippur itself, and provide substantial new data for the study of central aspects of society, economy, and administration that traditionally lie at the core of research about Kassite Babylonia.